The spread of an unusually severe form of CMD was first recorded in Uganda in the late 1980s and has subsequently spread to affect more than 4 million km2 across 11 countries of East and Central Africa. Production losses are estimated at 47%, with annual economic losses of more than USD 1.25 billion. These losses impact on the food security of millions in sub-Saharan Africa, resulting in hunger and recurrent famines.

NRI, in collaboration with its partners, has worked to control the CMD pandemic in East and Central Intensive R&D programmes were subsequently carried out by NRI and its partners to understand the nature and extent of the vector-borne disease spread, identify cassava varieties resistant to the new virus, as well as the first ground-breaking research into why populations of the African cassava whitefly (Bemisia tabaci) that had also increased dramatically. These efforts, along with African National Research Organisations, international research institutes and universities, contributed to the restoration of cassava cultivation in Uganda by the late 1990s, and increased food security and income generation in the eastern African region. A more recent epidemic of Cassava Brown Streak Disease (CBSD), caused by CBSVs, is currently spreading throughout East and Central Africa with devastating consequences. African cassava whitefly populations in the affected regions of East and Central Africa continued to increase and become super-abundant, leading to increased spread of CMD and CBSD. Specifically, CBSD has become the biggest constraint for cassava production in eastern Africa for the last decade, causing annual losses in excess of USD 736 million to smallholder farmers. CBSD causes rotting of affected roots making them unfit for human consumption or industrial use. CBSD was once considered to be benign, but since 2004 the disease has spread to more than 10 eastern and Central African countries, affecting food and income security. 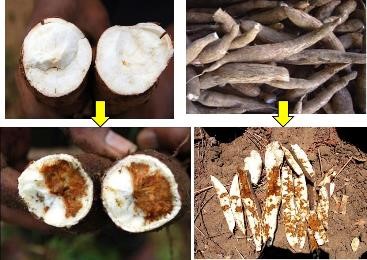 Currently, a new African Cassava Whitefly Project project is seeking to provide a rigorous understanding of the causes of super-abundant cassava whitefly populations in East and Central Africa and thereby creating the foundations for future, durable-control solutions.